To support all Emergency Services Personnel, to engage with each-other in creating a culture change to remove the social stigma that has long been associated within emergency services.
We strive to achieve a healthy future for all our first responders, by providing alternate pathways of external professional help and positive support to work through the difficult times. 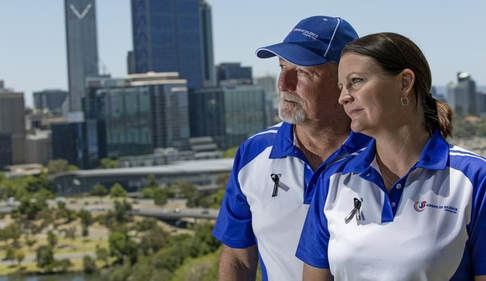 Sirens of Silence Charity Inc. was founded in 2015 to raise awareness of Anxiety, Depression, PTSD and Suicide Prevention within the Ambulance Industry, it is now progressing to find supportive measures to assist ALL emergency services through out Australia.

To take you all back to the very important beginning of our journey, 2014 was a year of shattered dreams and new beginnings not only for us, but for some of our colleagues, who we didn't realise were struggling. After I was diagnosed with a career ending injury, and having to deal with the heart breaking decision of losing the Paramedic career I loved and worked so hard for, I struggled to find a new way forward and a new passion, whilst my husband is forever scarred by his own issues with work, he is still a passionate Paramedic in the north ofW.A.

Sitting at home one Sunday night a story aired on channel 7 late in 2014 about a police officer who struggled with PTSD, which lead to his eventual suicide. His incredible story was told by his wife and aired the 000 recorded call the officer made moments before his suicide. This sad story shattered us to the core, a few weeks later a Paramedic in WA took his own life, the week after that another ambulance colleague and friend of mine took her own life. This was the 4th known ambulance personnel to suicide within 12 months in W.A. a burning pain from within lead to my new passion to help save lives and make a change into the very subject that has always been taboo for emergency services.

So we began our new journey with a peer support page on Facebook for ambulance personnel to share stories and support each other by simply being there. Members of the page are able to share feelings and suggestions to help each other work through the emptiness. After the loss of a 6th Ambulance employee in W.A. within 14 months, we decided a serious change in culture was required from the ground up. With great support for change from those that matter on the ground, we put wheels in motion and started our National Remembrance Day for the 'In our Hearts" ribbon campaign which we launched at our first Mental Health Seminar in December 2014.

Within 4 weeks 2000 ribbons were distributed around Western Australia, Victoria, Queensland and the Northern Territory. December 22nd is our National Day of Remembrance for those we have lost. So the next step forward could only mean one thing, a charity to help those who look to be slipping through the net, so began Sirens of Silence Charity Inc.

Lyn and Ian Sinclair.
Below is a story which played an important role in the creation of Sirens of Silence...
Police officer's suicide call 'I'll be gone before they arrive'
WARNING: This article deals with suicide and could be triggering for some readers.
Click here to view story
​HOME  |  ABOUT  |  SUPPORT SERVICES | SUPPORTERS  |  MEMBERSHIP  |  NEWS ​ |  CONTACT
Sirens of Silence Charity Inc. is a registered charity with the ACNC and the ATO for donations over $2.00 being tax deductible.